Your free gift is at the end of this article.

Is There More to (Your) Life?

Do you agree that every person is on a never-ending quest for satisfaction? It started when we were born, crying for milk and comfort. As we became older, that quest took on a different form. While food will always be a vital necessity, we've moved on from the pacifier to other instant and long-term pursuits to satisfy the longings of our existence.

The quest for satisfaction is endless, whether in relation to our physical bodies, mental health, emotional well-being, or interpersonal relationships. Maslow’s famous Hierarchy of Needs has the following order:

While this order may not necessarily pinpoint everyone perfectly, they are general truths that, in some form or another, are the reality of everyone’s life. Simply put: you and I want to be deeply satisfied, whatever road we take to reach that goal.

The Hamster Wheel and Rat Race

For many, though, the pursuit for deep, genuine, and lasting satisfaction is like a hamster wheel or a competitive rat race. We fiercely pursue the latest “cheese,” only to find out we’ve lost the race or need more cheese. More, more, more is often not only a driving force but also a taskmaster. Contentment is an archaic word that's out of place in the I Want It All mindset.

Obviously, there are many times when we do feel satisfied, having captured the latest "cheese” or embarking on a new season in life, in contrast to the routinely mundane. That satisfaction, though, gradually wears off until the new becomes the normal.

Most of these pursuits are part of everyday life and are common. Yet, there are also millions who abuse, extort, steal, and even kill in order to satisfy their lust for control, power, possessions, and revenge. What about life-controlling addictions? Often, it goes from worse to far worse.

A Void and a Filler

God's word addresses our need for deep, genuine, and lasting satisfaction. It has been stated that God has created us with a void that only He can fulfill. Whatever your perception of God, consider these verses:

Come, everyone who thirsts, come to the waters; and he who has no money, come, buy and eat! Come, buy wine and milk without money and without price. Why do you spend your money for that which is not bread, and your labor for that which does not satisfy? Listen diligently to me, and eat what is good, and delight yourselves in rich food. Incline your ear, and come to me; hear, that your soul may live; and I will make with you an everlasting covenant, my steadfast, sure love for David (Isaiah 55:1-3).

God is entirely pro-satisfaction! When we think of sin, we often only think of major ones like lying, stealing, cursing, adultery, murder, etc. The literal meaning of sin, though, means "to miss the mark,” to miss the goal for why we exist. In these three verses, God offers deep, genuine, and lasting satisfaction to “everyone who thirsts,” to everyone who wants to be genuinely satisfied but seek it in all the wrong places.

He offers such satisfaction as a free gift. It's “without money and without price.” You simply have to come to Him and “listen diligently” to who and what He has graciously given to you. Obviously, a gift has to be received in order to enjoy the benefits.

Jesus used the most basic necessity of life—water—in relation to our most basic desire as a human being: to be deeply, genuinely, and lastingly satisfied. He's able and more than willing to freely give you such "living water," which far supersedes anyone and anything in this world, to say the least.

Later on, Jesus would define this “living water” as follows: “And this is eternal life, that they know you, the only true God, and Jesus Christ whom you have sent” (John 17:3). If God truly exists, would you not agree that, apart from Him, everything is a missing-of-the-goal in life?

While we can define life as “physical entities that have biological processes” (Wikipedia), I assume you agree that life is much more than just the temporal reality of such impersonal, random, without design and purpose, biological processes. Your soul has eternity stamped on it: “He has put eternity into man’s heart” (Ecclesiastes 3:11). You’ve been created for so much more than a never-ending hamster wheel or a competitive rat race.

If God is truly infinite, which He is, you will never come to the end of finding a deep, genuine, and lasting satisfaction in Him, not just in this world but throughout endless ages: “You make known to me the path of life; in your presence there is fullness of joy; at your right hand are pleasures forevermore” (Psalm 16:11). That verse is in sharp contrast to: “There is a way that seems right to a man, but its end is the way to death” (Proverbs 14:12), which refers to a life and an eternity without God, your creator.

That’s why God’s word refers to sin as “deceitful desires” (Ephesians 4:22), for it promises satisfaction but, sooner or later, will leave you empty, disillusioned, and full of regret. On the other hand, when you have Jesus, you have everything, including when weakness and weariness will set in, which will happen sooner or later: “My flesh and my heart may fail, but God is the strength of my heart and my portion forever” (Psalm 73:26). Is He your eternal portion, or will you end up empty-handed?

While God's word has much to say about the reality of sin and the inevitable consequences, it has much more to say about the realty of His good news about redemption, reconciliation, and restoration, no matter who you are. For example, we read: "He heals the brokenhearted and binds up their wounds" (Psalm 147:3).

Centuries later, Jesus basically echoed those words when He said: "Come to me, all who labor and are heavy laden, and I will give you rest. Take my yoke upon you, and learn from me, for I am gentle and lowly in heart, and you will find rest for your souls" (Matthew 11:28-29). Will you accept His invitation and receive His free gift? You'll never regret it!

For more information about Jesus and God’s Inexpressible Gift to You, click the book cover to download your free copy... 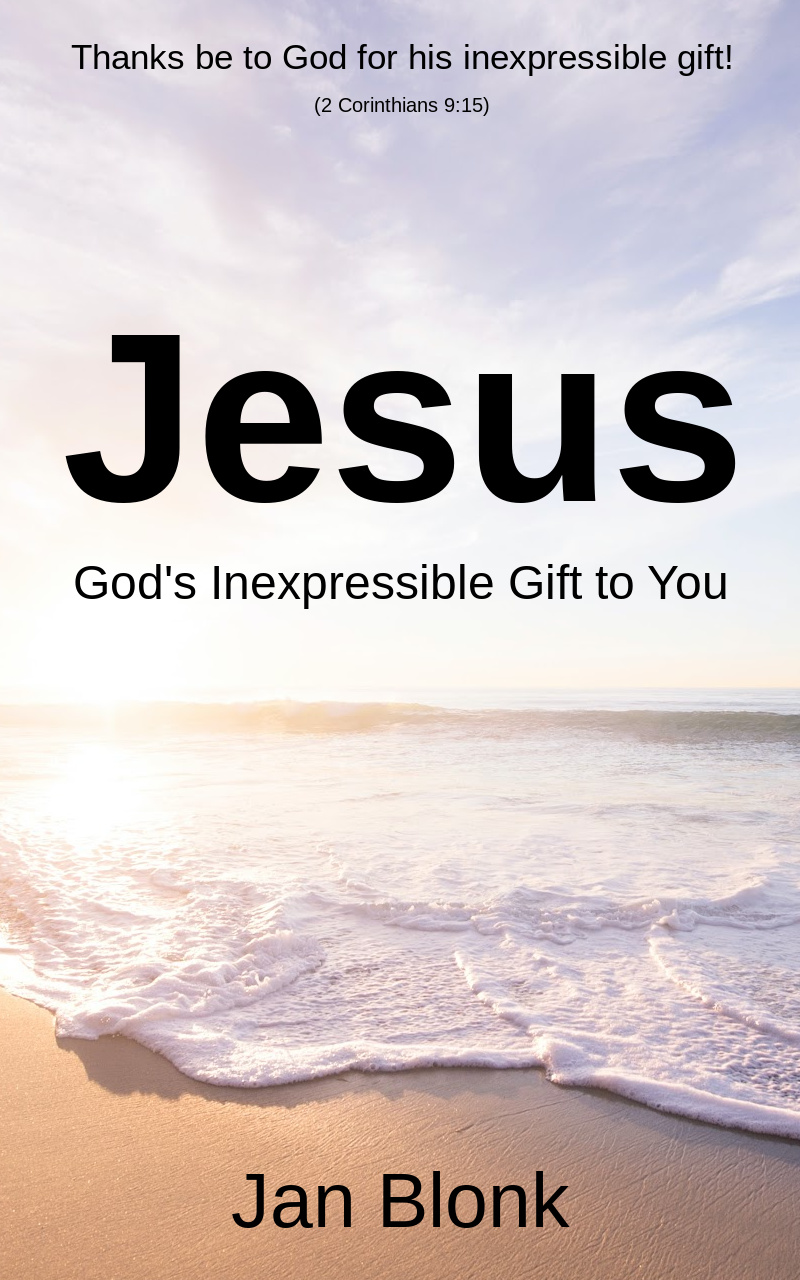 You can also get this book on Amazon and Smashwords

This article and book is an easy way to share Jesus with others.
Just share this link: www.your-free-gift.com

(The link will take you to this page)

75% royalty of your book purchase goes toward bibles for the persecuted church. Each book comes in Epub, Mobi, and PDF format, allowing you to read them on any device and app. If you’re not satisfied for any reason, you can request a full refund.

Your book purchase will help distribute 10,000 bibles to our persecuted brothers and sisters.